Ten years ago, we conceived our miracle child.  Our journey to foster and adopt began with our 9 year old son, Daniel, asking for siblings when he was about 4 years old.  We were told we could not have children before we were miraculously blessed with our son.   We had briefly considered adopting when my husband and I were told we could not conceive.  I knew a little about the Heart Gallery so I decided to show my son pictures from the Heart Gallery to explain to him about adoption, and that there were other ways to build our family and for him to have siblings.  This is when our journey began and it has been an emotional, life changing, and beautiful ride.

Our first foster placement were two brothers, ages 2 and 6.  When they brought these two scared boys to my home, they cried for their mom.  I remember laying on the floor next to the 2 year old’s crib with my hand inside his crib because he needed that security.  He wouldn’t sleep on me but wouldn’t sleep without the comfort of my hand.  Their mother committed suicide the night they came into care. The older boy urinated the bed and started screaming when he saw the stuffed animals that I had for them in his bed.  These boys needed us and no matter how hard it was on all of us, what they were going through was tenfold more difficult. The day these boys were placed with a 20 year old adult brother was our first experience with loss.  We remained in contact with them but they were moved from there shortly after.  Still, I think about them often but have found tremendous comfort in knowing that we were there for them in the most difficult time of their lives.  Knowing that fulfills our hearts in such a way that keeps up involved with the foster system.

We continued to foster short term and emergency placements after that, until we received our next long term placement. This placement was our adopted daughter, Demi.  Demi was at a shelter when we were placed with her.  She was a pre-adoptive placement and her biological mom had already began the process of TPR. I remember picking her up from the shelter and looking at her and feeling this instant connection and love for her.  They placed her in my arms and I was mom.  No one would ever change that.   We adopted Demi about one year later.  Demi has brought our family so much happiness and made me mommy to a beautiful little girl.

By now, our passion for the kids in the system and seeing the need for loving homes kept our family involved.  We continued to take short term placements.  At this time, I was helping placement find the kids homes when they would come into care.  Two days before Hurricane Matthew, I received a call from placement about two pre-adoptive baby boys.  I assisted them with finding placement for the first one but the second was difficult to place because of the drug exposure.  They told me he would be sent to the shelter and since he was a pre-adoptive placement, I felt that with a little more time I could find him a home.  I agreed to take him temporarily until the storm passed.  When he arrived at our home, I was handed this shaken 5 pound baby.  Over the next few days, I learned first-hand what a baby goes through when they are going through withdrawals.  “Baby D” would cry uncontrollably and shake, making it impossible to feed him or stay asleep.  I learned a way to hold him in order to make the shaking stop and allow him to feed and sleep.  I carried him on my chest 24 hours a day.  That first week, I became his mom.  The thought of giving him over to someone else was unbearable.  He was now a part of my heart and would remain with us.  This feeling that I felt for him is something that no one will ever understand.  I spent many nights looking at this helpless baby as tears rolled down my cheeks. We are now in the process of finalizing our adoption of this sweet boy.

We are also fostering a 2 year old little girl, who has been with us for about 6 months.  She is in the process of reunifying with her mom but we feel blessed to be able to there for her as she transitions back home to where she belongs.

What started out as a selfish reason to expand our family quickly evolved into this realization that there was such a need for families to love and care for children that were suffering within our own community. I call our journey “The Blessing of Infertility” and as my favorite country song states, “Some of God’s greatest gifts are unanswered prayers.” 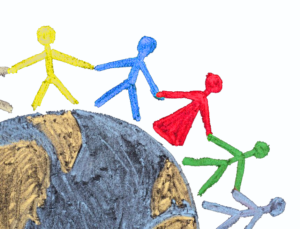